Many flights cancelled in Japan on heavy snow, extreme cold 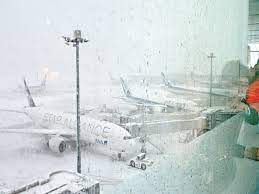 Heavy snow covered large areas of Japan today, Wednesday, and hampered transportation, causing hundreds of flights to be canceled and trains to be disrupted, and at least one person was killed.

According to “Reuters”, unusually cold weather and severe depressions led to snowfall and strong winds across the country, starting on Tuesday.

Snow fell particularly heavily in the part overlooking the Sea of Japan, as record snow fell on the city of Maniwa in western Japan, reaching 93 centimeters in 24 hours.

Chief Cabinet Secretary Hirokazu Matsuno told a news conference that one person had died in the storm and two other deaths were confirmed to be related to the cold weather. No other details are available yet.

And media reported that domestic airlines canceled more than 300 flights and bullet train services were suspended or postponed in northern Japan.

The Japanese Radio and Television Corporation said that the snow caused cars and trucks to stop for a distance of about ten kilometers on a highway in central Japan.

About 3,000 people were stranded at two train stations in the western city of Kyoto after snow and strong winds suspended services on Tuesday and some passengers were forced to sleep on the floor at Kyoto’s main station.

It is possible that strong winds associated with the storm caused the sinking of a cargo ship registered in Hong Kong between western Japan and Jeju Island in South Korea early Wednesday. Thirteen of the 22 crew members were rescued, and the search continues

Severe weather is expected to continue until Thursday.

Aramco CEO: Current conditions are excellent to localize supply ‎chains in the Kingdom