For The 5 th Time, flynas Wins SKYTRAX Award As The Best Low-Cost Airline in The Middle East 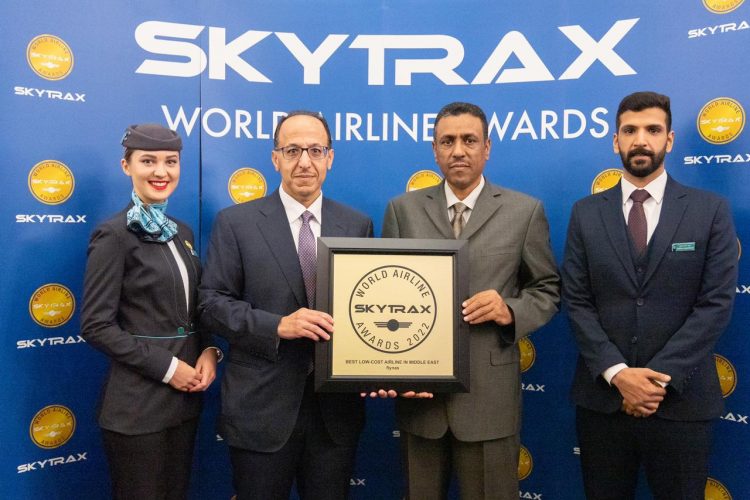 flynas, the Saudi air carrier and the leading low-cost airline in ‎the Middle East,‎‏ ‏won Skytrax Award as the Best Low-Cost ‎Airline in the Middle East for the fifth‏ ‏time in a row at a forum ‎held in London on Friday, September 23, 2022.‎

The Skytrax Award, launched in 1999, is the highest award in ‎the aviation industry and the most important global standard ‎for excellence among airlines worldwide.‎

Bander Almohanna, CEO of flynas, said: “The crowning of flynas ‎for the fifth year in a row as the Best Low-Cost Airline in the ‎Middle East with the Skytrax Award in the most important ‎global forum for the aviation industry confirms our leadership ‎as a national air carrier that raises the name of the Kingdom ‎high on its National Day, and achieves the goals of Saudi Vision ‎‎2030 and the Strategy for the Civil Aviation Sector in KSA.‎

He stressed that this win reflects flynas’ commitment to ‎operational excellence and meeting the aspirations of its ‎traveling guests, in addition to achieving its growth and ‎expansion strategy under the title “We Connect the World to ‎the Kingdom,” which included launching more than 16 new ‎destinations in 2022, bringing the number of flynas ‎destinations to more than 70 domestic and international ‎destinations.‎

‎“flynas fleet continues to grow, as it reached 38 aircraft in the ‎first half of 2022 and will increase to 52 aircraft by the end of ‎‎2023. In addition, flynas Board of Directors approved to ‎increase the purchease order for new aircraft to 250 aircraft, in ‎an effort to participate effectively in achieving the Strategy for ‎the Civil Aviation Sector in KSA, which aims to reach 300 million ‎passengers and connect the Kingdom with 250 international ‎destinations by 2030,” Almohanna added.‎

The Skytrax Awards are awarded after a multi-month ‎evaluation that includes more than 100 countries; by ‎conducting the largest survey of its kind to measure passengers’ ‎satisfaction in the world annually. Based on the survey results, ‎the winners of Skytrax Awards are announced.‎

flynas has achieved the highest rating in the Official Airline ‎Rating conducted by the non-profit organization APEX, which is ‎one of the most significant association of airlines worldwide. In ‎the assessment that included 600 companies globally, flynas ‎was ranked in the 4-star low-cost carrier category, the highest ‎category of low-cost airlines. Moreover, flynas has been ranked ‎as the Leading Low-Cost Airline in the Middle East by the World ‎Travel Awards for seven consecutive years.‎

Dollar pauses for breath as euro and pound try to rebound